The 2004 Harvest Festival went great. We had temps in the low 80s. Perfect!!! Our sign-in book had about 300 people, and we figured maybe another 50 didn't sign in, or maybe one person signed in for a whole family, so probably around 350 people thru the course of the day. We had 7 acts on the stage from 1:00 to about 8:30pm. (movie at 9pm) There were also volleyball and badminton courts set up, and of course, frisbees!

Here (finally) are some of the results for our latest Harvest Festival. I tried to obtain photos of all the bands, but wasn't able to take photos of bands I played in. 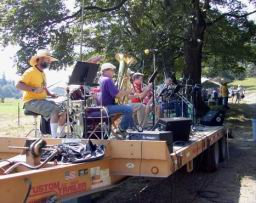 Lots of people. This was the main seating area in front of the stage. The big white screen is.... the movie screen for later. We saw some "3 Stooges" shorts, and then "Clockwise" starring John Cleese. Outdoor movie under starry skies. Cool! 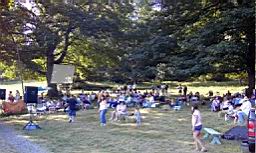 And here's the "stage". It's actually a heavy equipment trailer that Eldon Murray uses in his excavation business. The PA main speakers are the big black boxes in front of the stage. The people lined up towards the center of the photo are in the food area. The Dustmakers are on stage. The Dustmakers - bluegrass band led by Michael LaRoche. Due to the fact that the stage is in the shade and it's a very sunny day, it's very difficult to get a good exposure of the performers on stage. This photo was edited to be able to see the players. 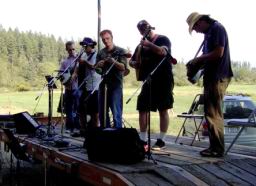 The Hay Ride Farm Tour. We took 9 trailers of about 15 people thru the day, for a total of 135 people. We had 2 tractors with trailers. The ride tours the farm, and takes about 40 minutes - depending on how talkative the driver is, and how much of a speed-demon he is behind the wheel, and what route they take. (The riders get to vote!). It's a very popular part of the festival. Eldon and George Murray did most of the tour driving and narrations. Ben Murray is driving this ride. 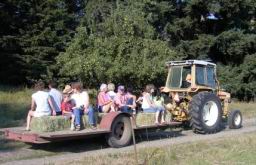 No, this isn't an ad for Mazda mini-vans! This shows the main area. We provided hay bales to sit on, and many people brought their own chairs. This also shows the size of the big maple trees that provide shade for the performers and the audience. At any given time, there are many people out on the hay ride.

The audience is listening! Mom (Phyllis Murray) is sitting right of center, and wearing a yellow Murray LLC t-shirt with the spiffy logo designed by graphic artist Cliff Piraphatanapong. The other yellow t-shirt is worn by Mom's "special friend" Ted Adsit. He opened the show by playing guitar, singing, and some harmonica, accompanied by myself on accordion. 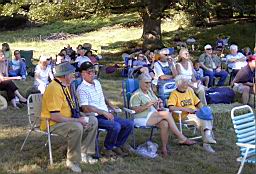 The Hilary Harris Band. (jazz and latin) I didn't get any photos of the band, as I was playing piano in it. However, this is Hilary, and her friend Tim, who played bass. 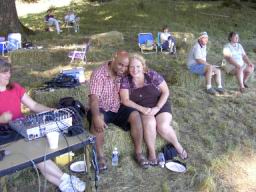 People watching the entertainment. The white canopy is the food area. We had hot-dogs, chips, ice water, ice tea, lemonade, coffee, and other goodies. The George Turner Group (rock, variety). I joined them later on accordion for their "acoustic set". You haven't lived until you've heard "Play That Funky Music, White Boy" on acoustic guitar, acoustic bass, and accordion!! George provided most of the PA system for our festival. 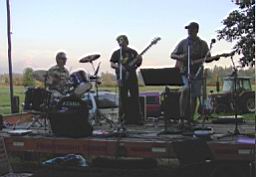 One of the often overlooked people in any stage production is the sound person. We were happy to have Michele Hansen running the sound for all the groups. She kept the volume at a nice level, as well as keeping the different instruments and vocals balanced so it all sounded great! 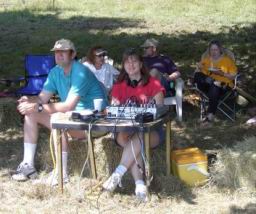 If anyone has photos of Ted Adsit, or the Hilary Harris Band, or the Krain Combo, or from the hay rides, or anything else of interest, contact me. CONTACT CLAYTON

Clayton Murray - I was the guy in a yellow Murray t-shirt, running around organizing the bands, doing the MC-ing (announcements and jokes, etc.) playing piano or accordion.

I have added a few more photos: The Krain Kombo (The Nelsons with their son on bass). I joined them on accordion on a few tunes. This is the "food court". No accordions allowed! 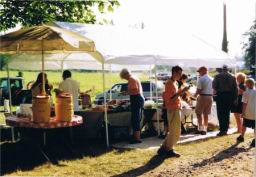