The 2005 Harvest Festival went great. The weather looked rather questionable the morning of, but it turned out to be very nice, getting quite warm at times. Our sign-in book had about 200 people, and we figured maybe another 50 didn't sign in, or maybe one person signed in for a whole family, so probably around 250 people thru the course of the day. We had 6 acts on the stage from 1:30 to about 8:00pm. (movie at 8:30) There were also volleyball and badminton courts set up, and of course, frisbees! After the final music act, we set up the outdoor movie, hanging a giant movie screen from a maple tree, using a projector with small sound system. Unfortunately, about 15 minutes into the movie, it started to rain, so we quickly packed up the movie and sound equipment and called it a day.

Here are some of the results from our latest Harvest Festival. The band photos are shown in the order they performed in, and I added a few other photos I hope you find of interest.

If some pictures don't load, you can right-click on their image box and select "show image" to force it to download. I'm not yet sure why that's sometimes necessary.

TED ADSIT on guitar, harmonica and vocals. I accompanied some with accordion. Old time country music. The tractor and trailer behind the stage are awaiting passengers for the next hay ride. 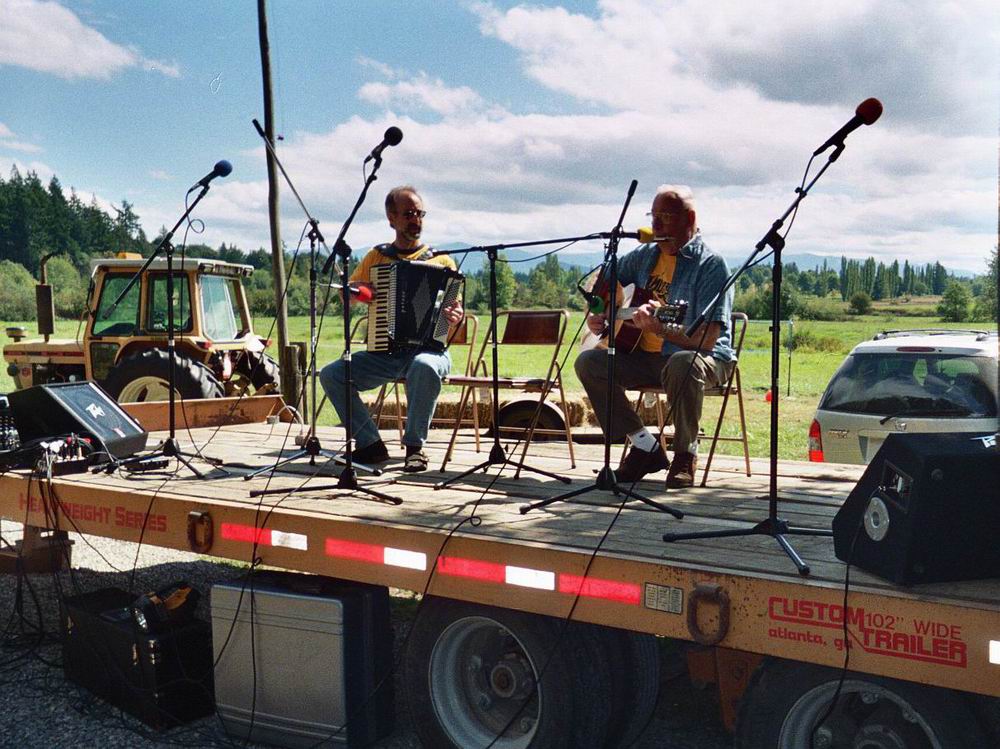 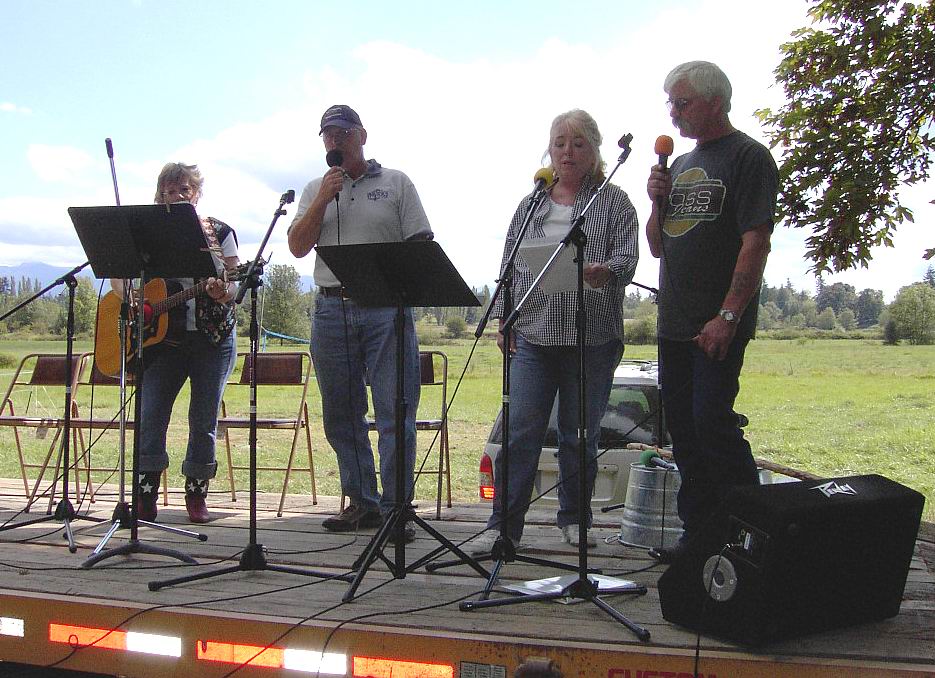 ENUMCLAW DIXIELAND BAND - Brian Murray on drums. They managed to play despite the tangle of mic cords & stands and music stands. We were short a chair so the trumpet player sat on his case. 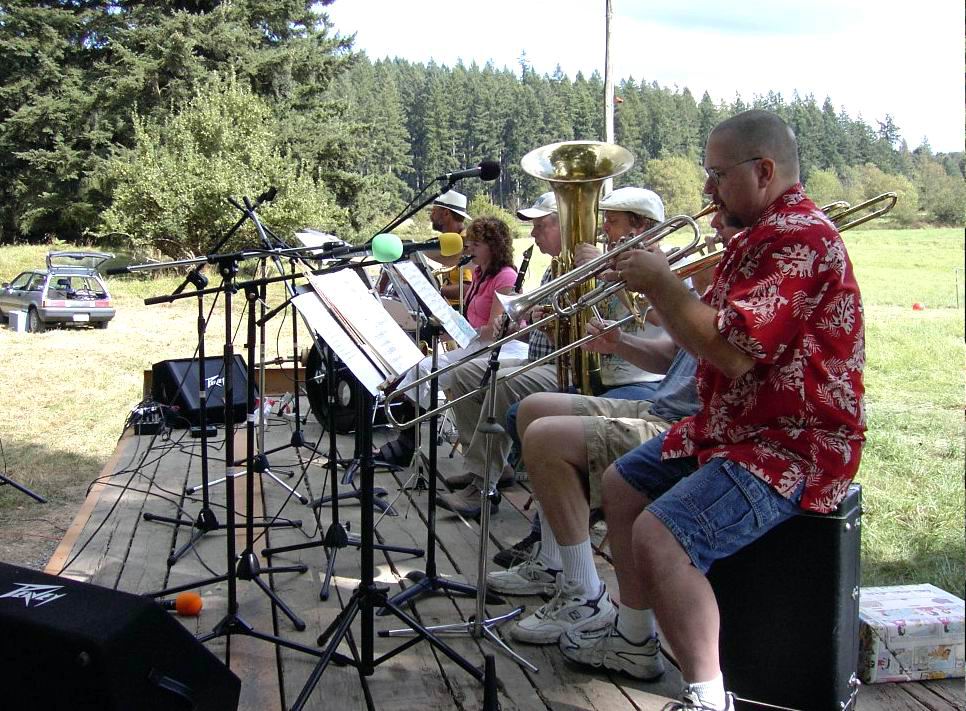 HILARY HARRIS BAND - Jazz and Latin. Hilary on Vocals, Tim Romain on bass, Scott Ketron on drums and I'm playing piano. The "stage" is the trailer that Eldon Murray uses in his excavation business. The food area is off to the right, under the white awning. 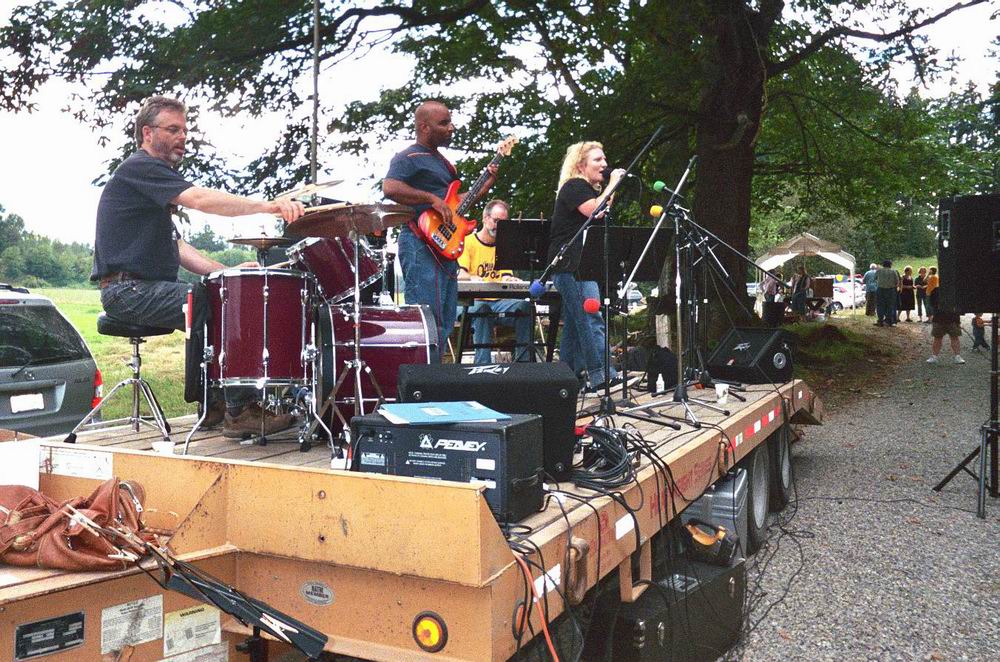 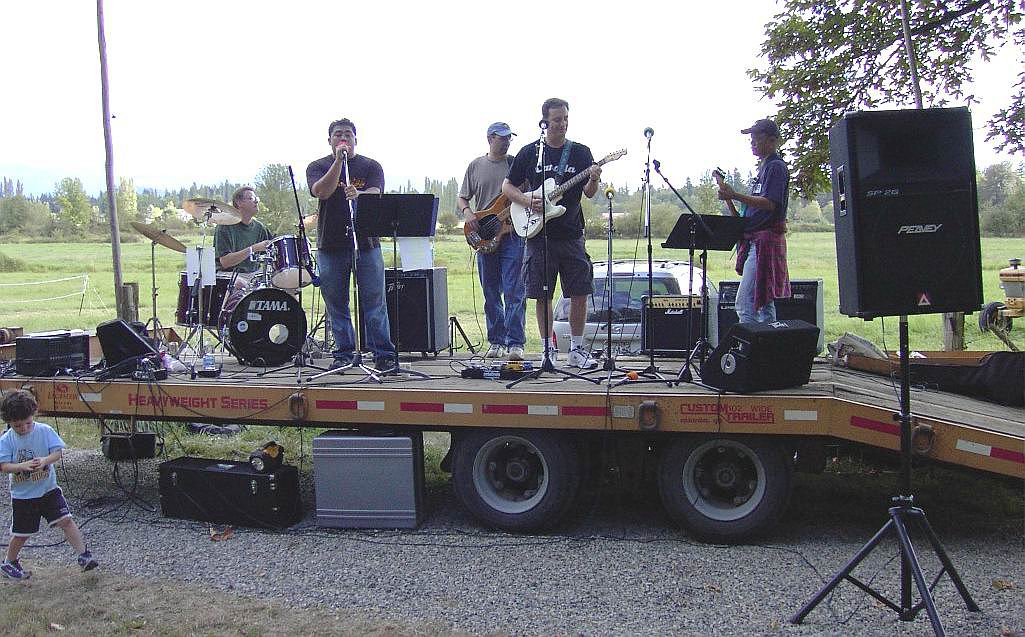 PICKETRANGE - Bluegrass music. That's my nextdoor neighbor Ross Anderson on fiddle. I figured I'd better invite his band to play or he'd get mad at me or something. Actually they were great!, and we hope to have them at our next festival. I had to lighten up this picture (and some others) quite a bit, as it's hard to get a good exposure of the bands with the bright sky behind them. 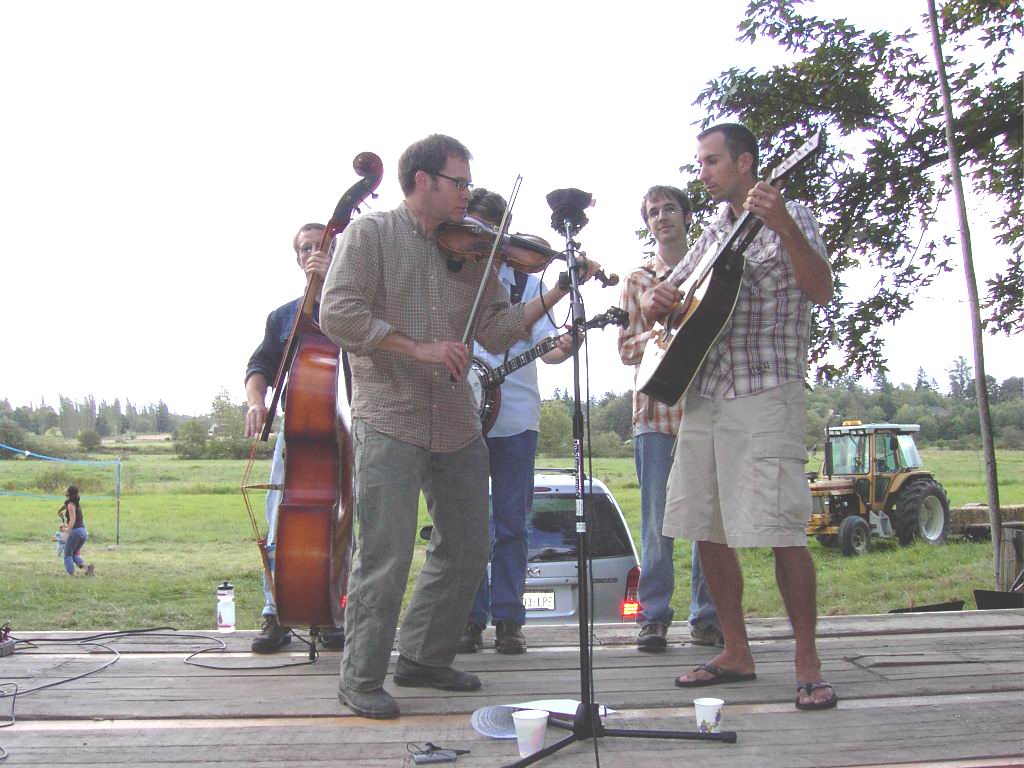 Here's an "artistic" shot of the Picketrange Band - this time no editing. Nice clouds as a backdrop. 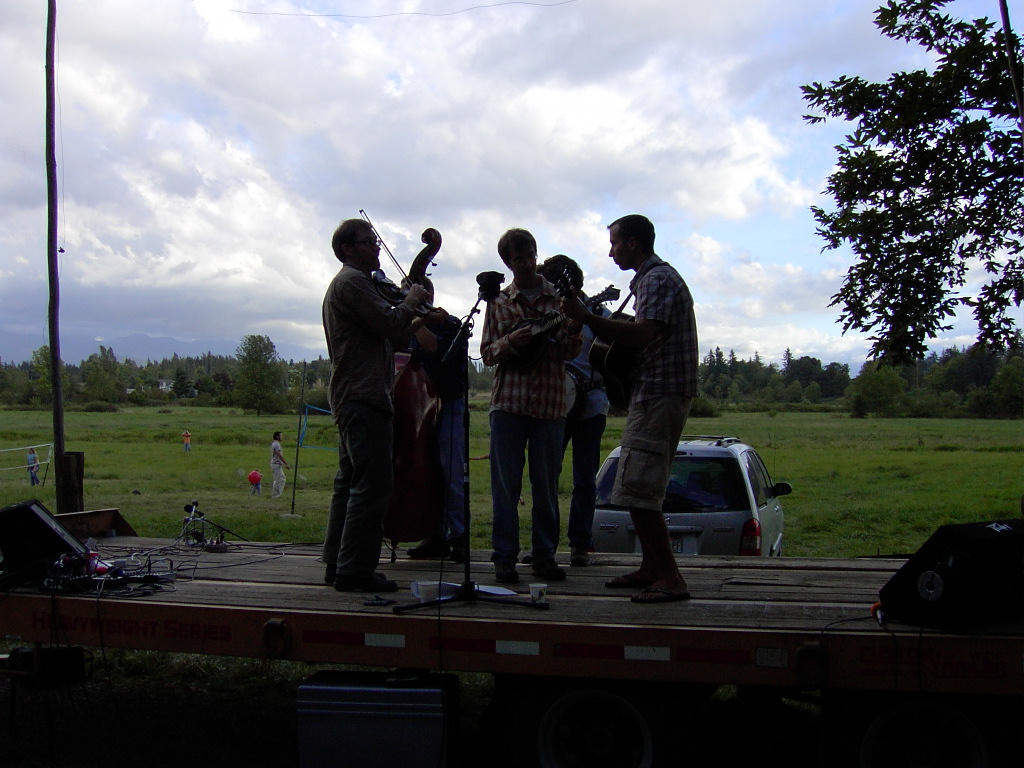 The HAY RIDE FARM TOUR. We took 9 trailers of about 15 people thru the day, for a total of 135 people. We had 2 tractors with trailers. The ride tours the farm, and takes about 40 minutes - depending on how talkative the driver is, and how much of a speed-demon he is behind the wheel, and what route they take. (The riders get to vote!). It's a very popular part of our festival. Eldon and George Murray did most of the tour driving and narrations. This photo is from last year, because nobody took one of this year. You can tell it's a hot day because the side windows and "escape hatch" door on top of the cab are all open. There are people playing badminton and volleyball in the background. 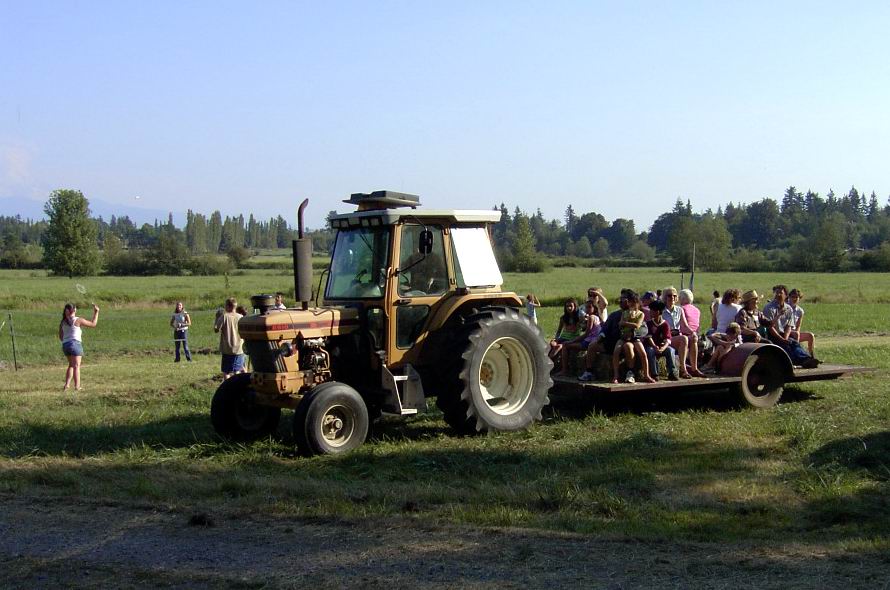 This shows the parking area. The tall dead tree in the center (in the distance) was this year's guessing game. It was 79' tall. Yellow balloons and signs helped mark the way thru a hay field to the festival area. And what outdoor music festival would be complete without porta-potties? Two blue ones to the right. 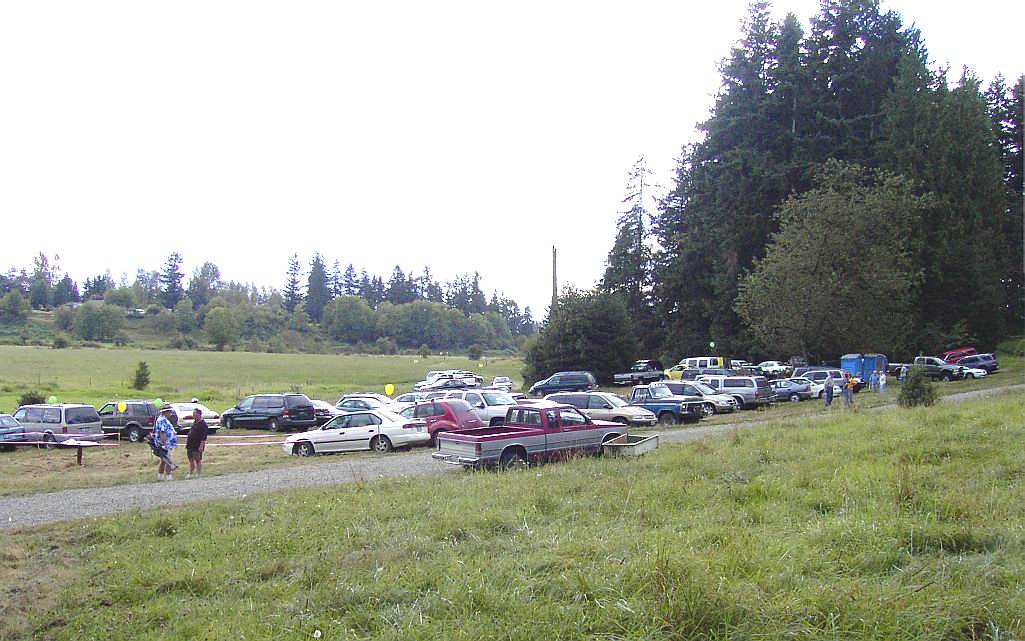 The Food Court. We had several tables of goodies, and had grills going cooking various kinds of hot-dogs. We also had 3 10-gallon containers with ice-water, ice-tea, lemonade, as well as a 45-cup coffee pot (refilled twice). Brian Murray did most of the grilling. 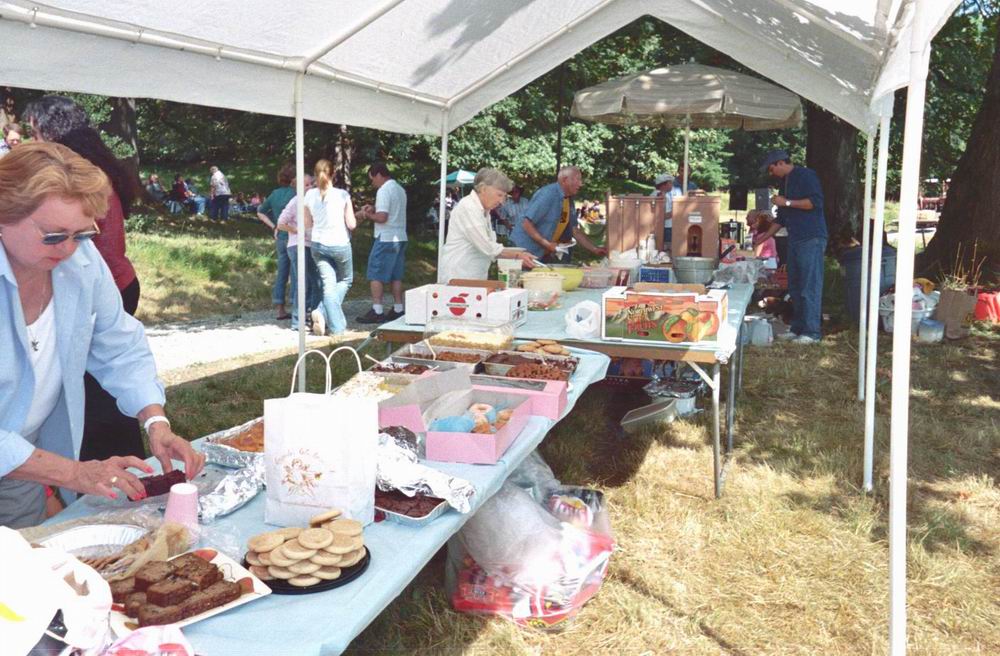 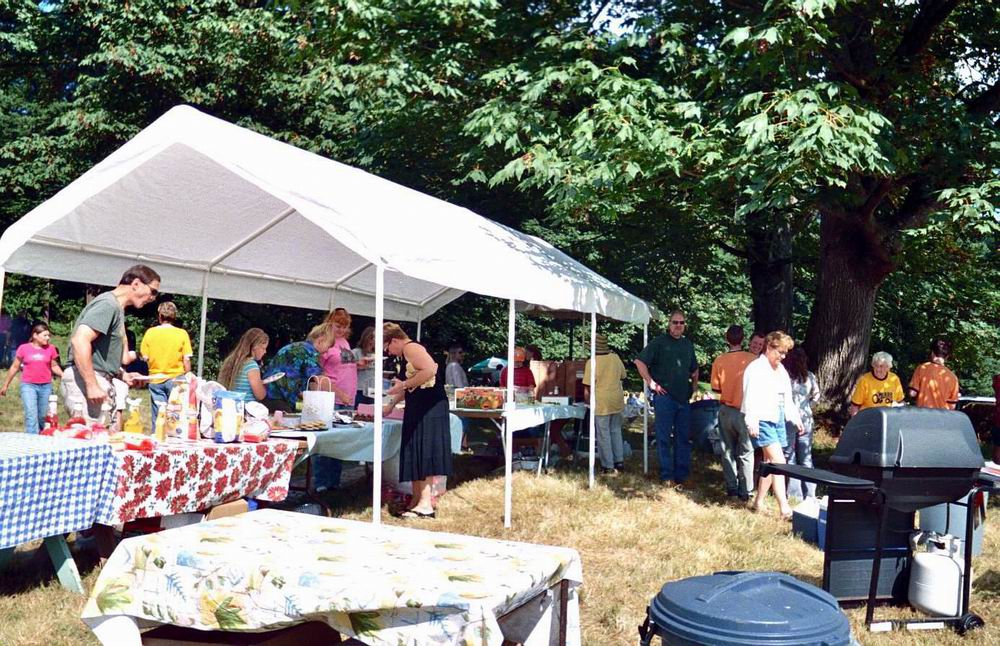 The Amphitheater-like seating area is in the shade of big maple trees. Another maple tree gave shade to the performers on the stage. At any time, there are many people gone on the hay ride. 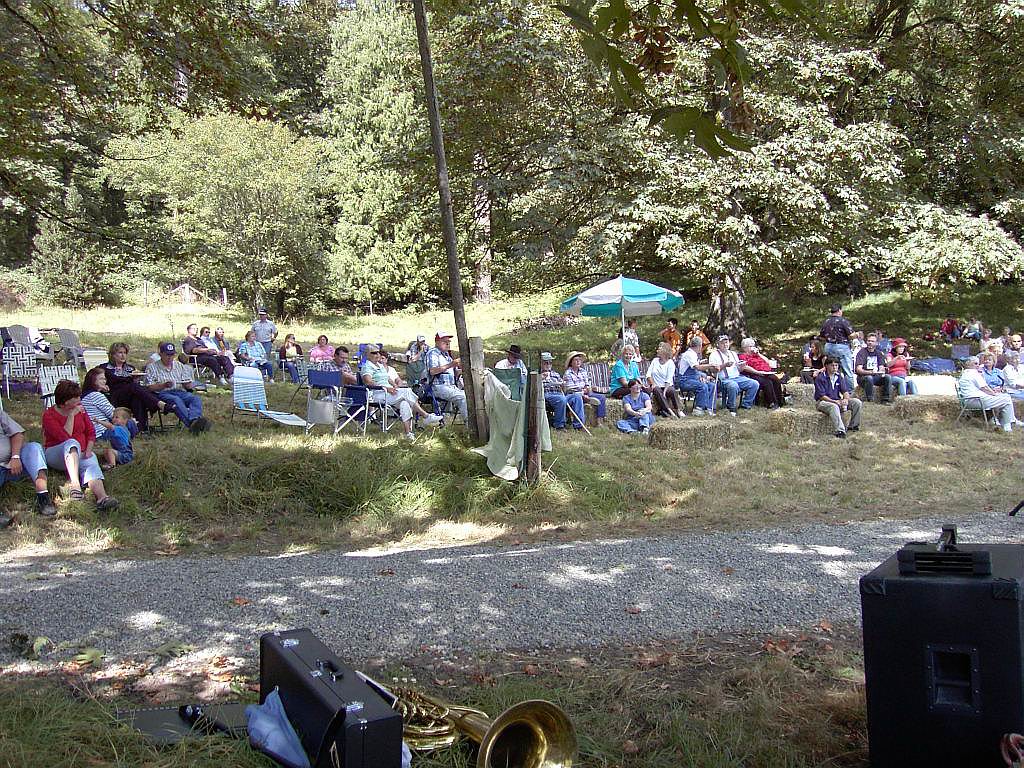 Mom (Phyllis) Murray and her special friend Ted Adsit - both wearing their spiffy yellow "Murray LLC" t-shirt with the logo designed by Cliff Piraphatanapong. That's also the logo at the bottom of this page. Jer Murray is in the background running the sound (without using his arms!). 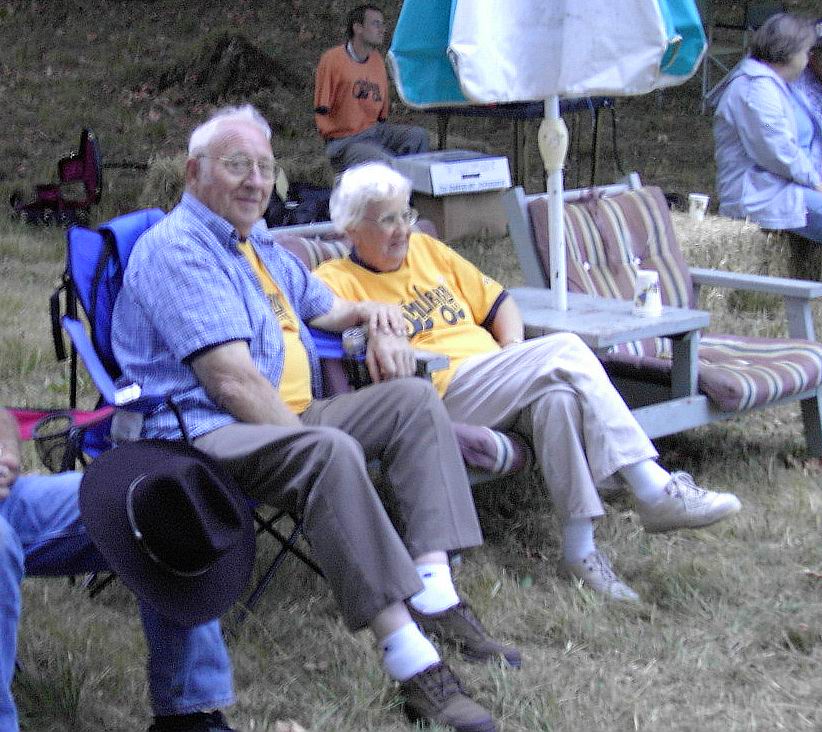 The sound system consisted of the main speakers at the stage, and an outboard mixer located in the audience area. I ran the sound most of the time, and Jer Murray helped some. The red doohicky is a digital recorder that Picketrange brought to record themselves with. I hooked it into the audio mixer. Also present are headphones and a mic I could use to give announcements from the soundboard so I wouldn't have to run up to the stage to do that. The channels are color coded to match the microphone wind screens. 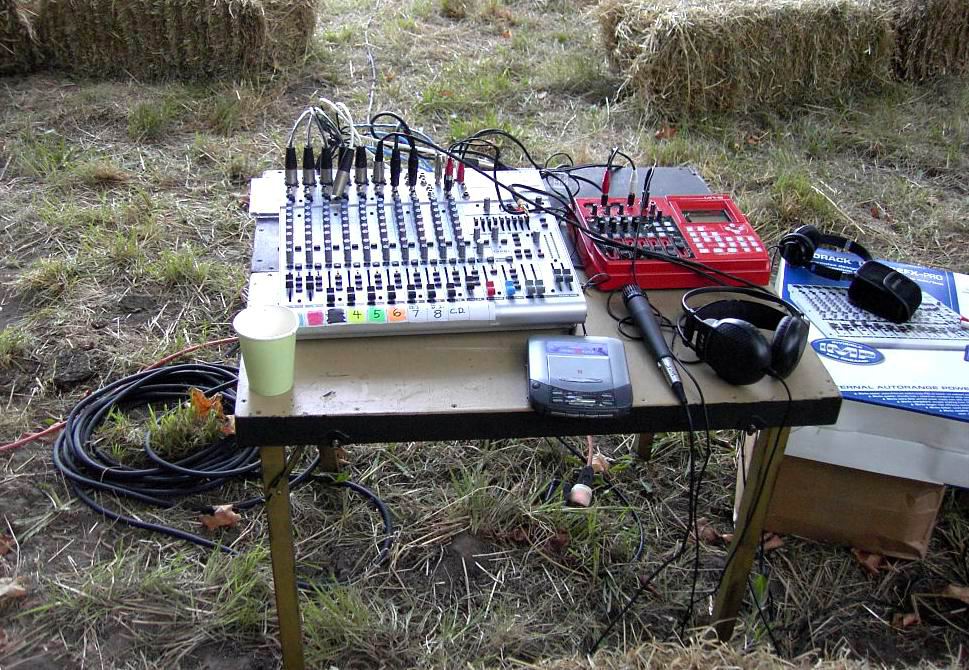 The view from back by the soundboard. We provided hay bales for people to sit on, and some people brought their own chairs. The Nelson Lasher group is on stage. Mom and George Murray are to the right. 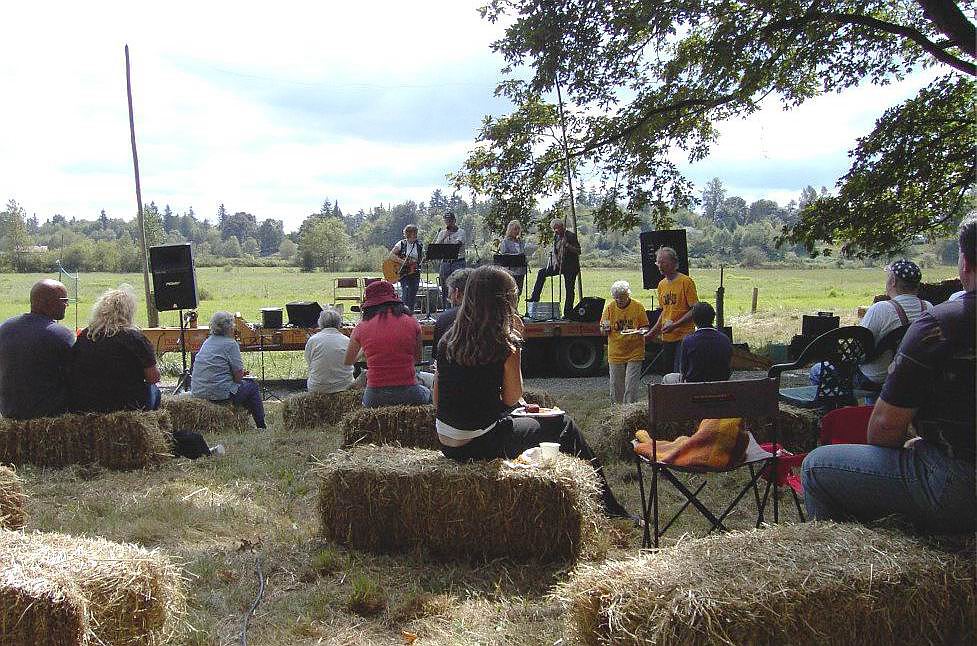 Clayton Murray - (I was the guy in a yellow Murray t-shirt, running around organizing the bands, doing the MC-ing, running the sound and playing piano or accordion).