The 2006 Harvest Festival went great, with many people saying they thought this was our best festival yet. The weather was perfect, with temps in the 80s. Using the sign-in book, the names on the guessing game sheet, and some rough estimates, we figured there were about 320 people attending thru-out the day. We had 7 acts on the stage from 1:00 to about 7:30pm. We also had plenty of food and drinks, as well as volleyball and badminton courts set up, and of course, frisbees! After the final music act, we set up the outdoor movie, using a projector with small sound system, and watched one of the old "Thin Man" movies. We even had microwave popcorn to enhance the movie experience.

Here are some of the results from our latest Harvest Festival. The band photos are shown in the order they performed in, and I added several other photos I hope you find of interest.

If some pictures don't load, you can right-click on their image box and select "show image" to force it to download. I'm not yet sure why that's sometimes necessary. Alternatively, you click on your browser's "back" button, then "forward", and that will restart the image downloads from where it left off.

LAST MINUTE ENTRY (Lance Wilder's guitar & bass rock duo). They filled in a vacated timeslot with only a little notice. Both of the tractor-trailers are behind the stage, awaiting passengers for their first hay-ride farm tour. The "stage" is a trailer that Eldon Murray uses for his excavation business. 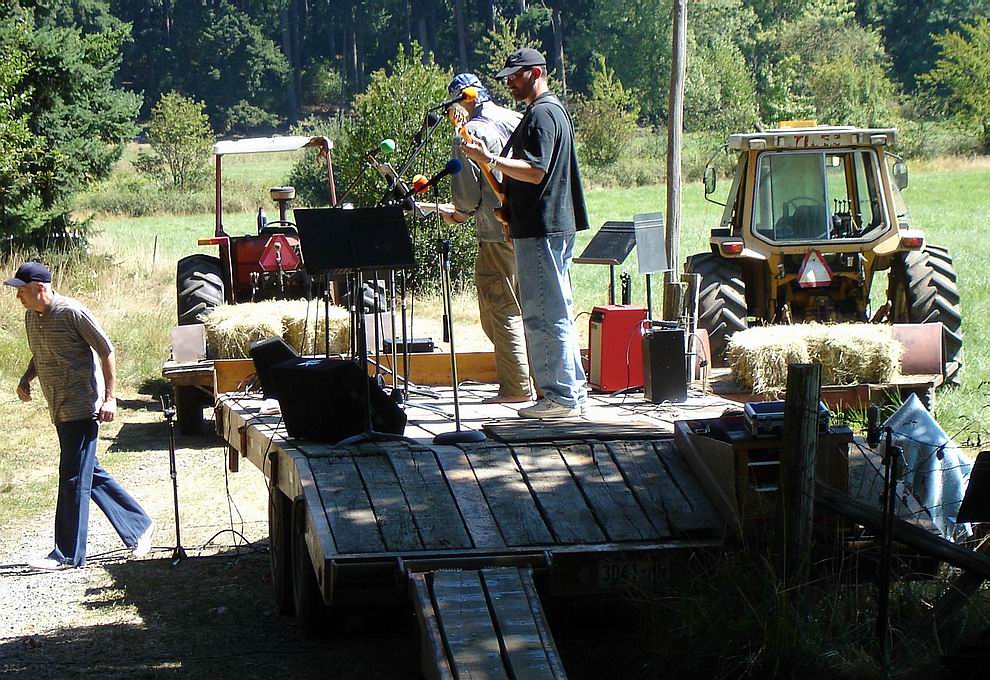 JOE SALZ (Cowboy Poet) He entertained us with humorous poetry relating to the cowboy's life. 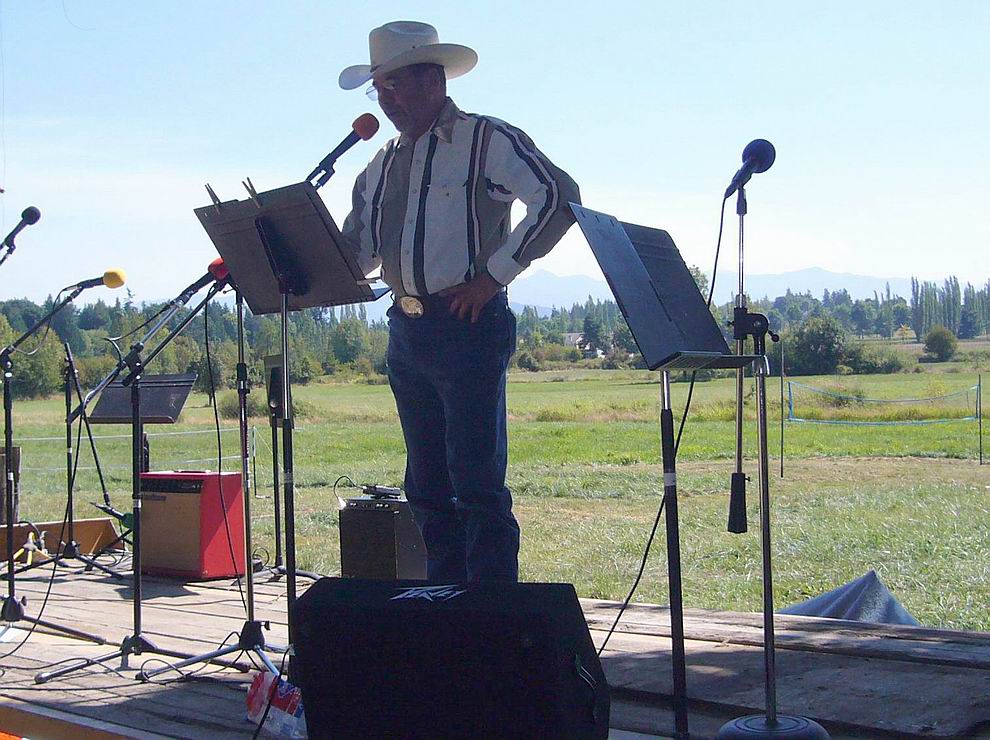 MARIA KRAMER (Gypsy Jazz) Looks like we're just getting ready to play. Maria Kramer on vocals, Ross Anderson on violin, George Turner on guitar, Rod Backman on bass, and me on accordion. 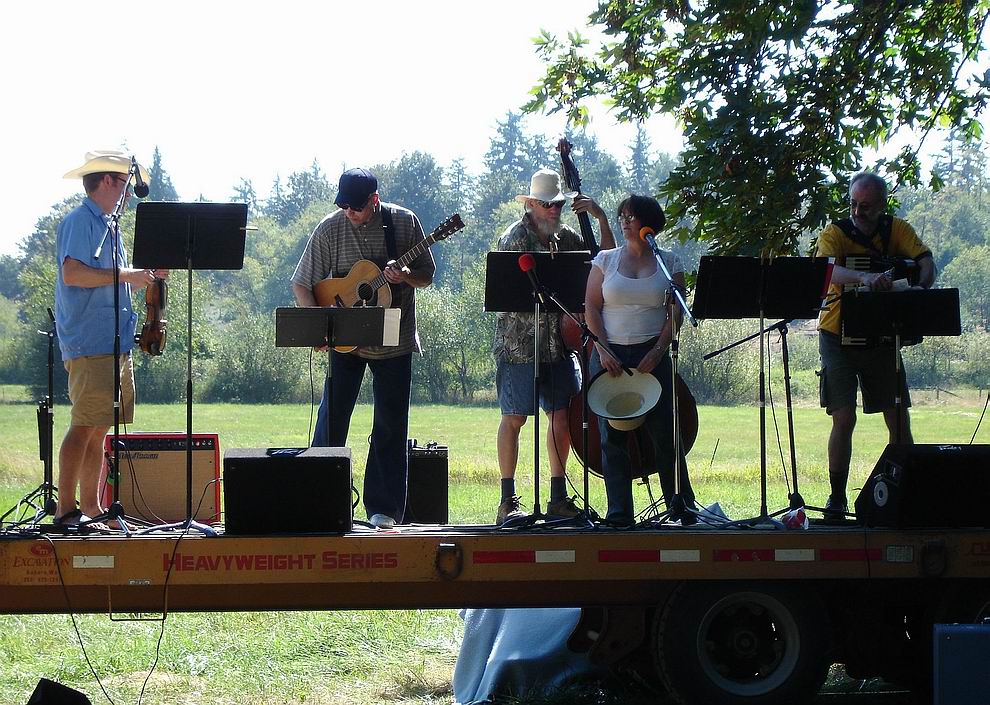 BALLARD SEDENTARY SOUSA BAND (The Finest NON-marching Sousa Band in all of Ballard) This community band plays marching band music - mostly by John Phillip Sousa. The band has been in existence for 20 years, and is based in Ballard, a community of Seattle. The band has about 35 members, but not everyone can make all the performances. We had 20 for this event. I've been playing tuba with them for over 2 years. My brother Brian (who plays drums in Enumclaw's Gateway Community Band) helped us out on snare drum, and Tim Romain (who plays bass with Hilary Harris's group) played bass drum for us. Liz Dreisbach is the group's fearless leader, and Edith Farrar our even more fearless baton twirler. 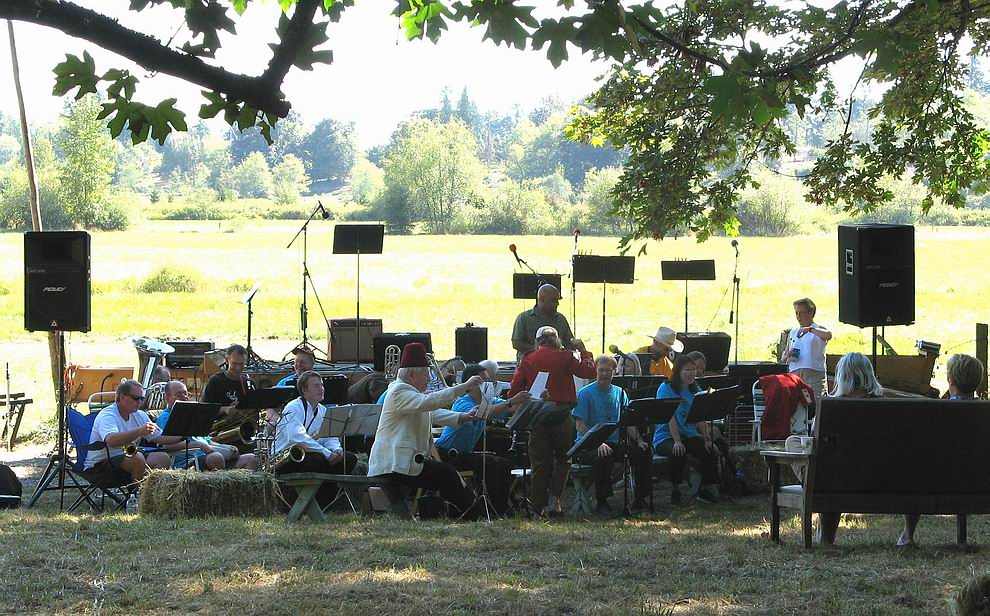 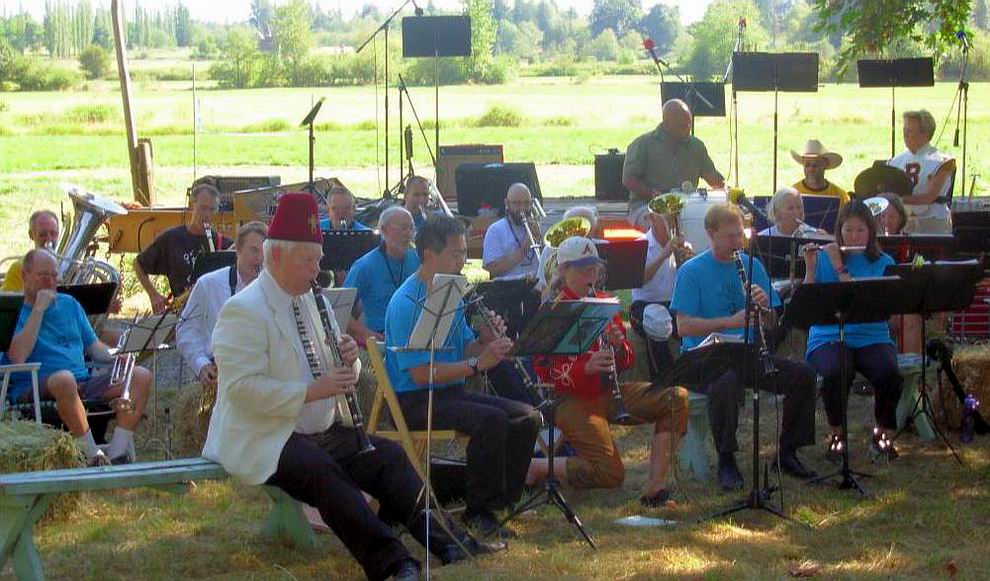 13 YEAR DROUGHT (Bluegrass music) That's my nextdoor neighbor Ross Anderson on fiddle. I figured I'd better invite his band to play or he might not invite me to his next bluegrass party. He wasn't able to get all of the members of his regular band that played our festival last year (Picketrange), but he was able to throw together a great group of other bluegrass players he knows well. You can see the food court area off to the right. 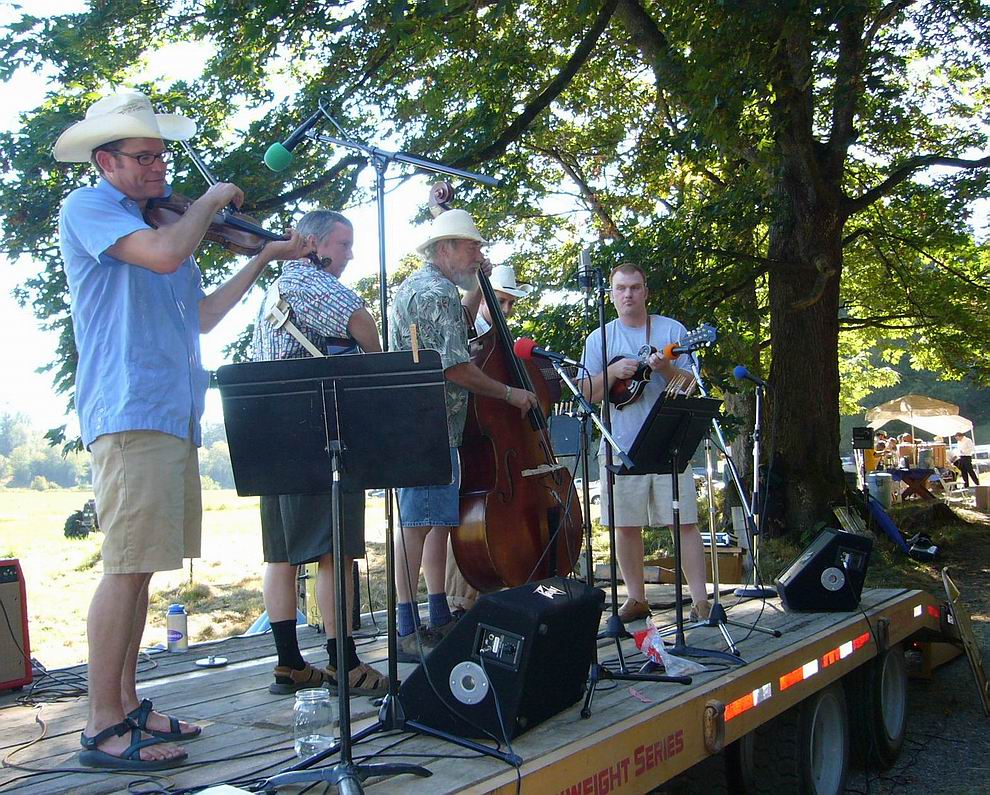 GEORGE TURNER BAND (Acoustic 60s - 80s) George Turner on guitar and most vocals, Anthony Peters on bass, Cheryl Johnson on drums and vocals, and Heidi Beck on harmony vocals. Cheryl and Anthony are of the "Johnson & Peters Tap Dance" fame. Every year I play piano for their Tap Dance Christmas Carol show, and George has performed in the show the last few years also. George has been very gracious to the Murray family for providing his PA system for every harvest festival so far. I provide the mics, stands and outboard mixer, but George provides everything else, along with his expertise in running the sound. 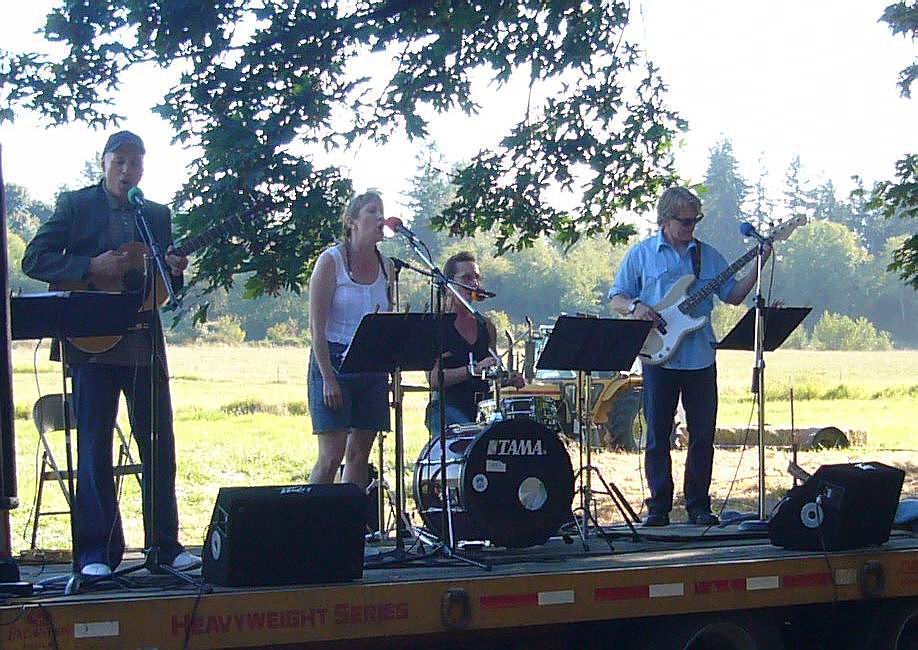 HILARY HARRIS BAND (Jazz and Latin) Hilary on vocals, Tim Romain on bass, George Turner on guitar, and me on piano. 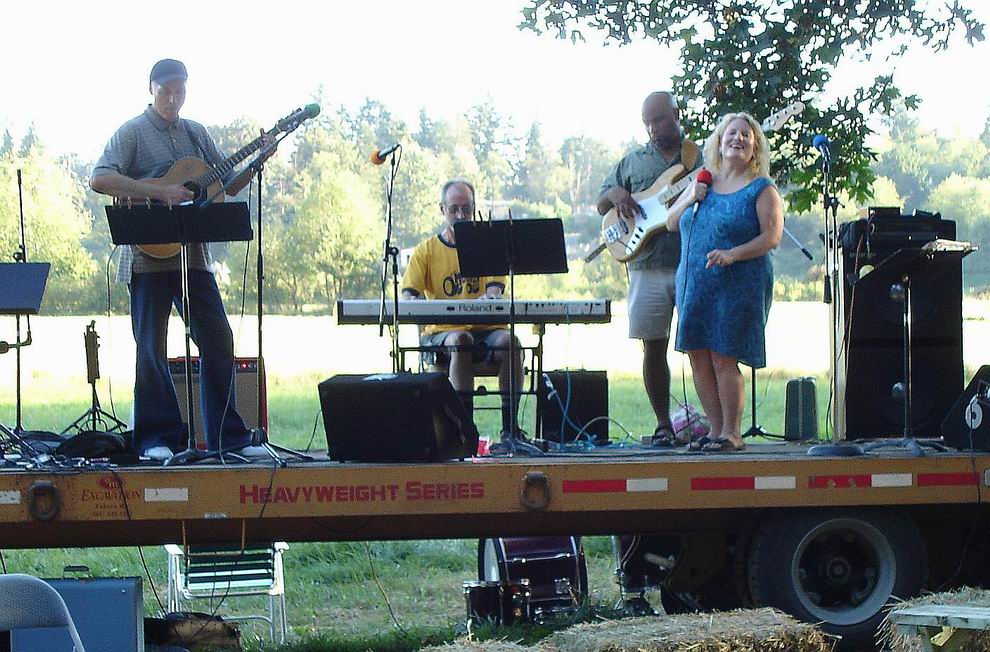 The HAY RIDE FARM TOUR. We took 9 trailers of about 15 people thru the day, for a total of 135 people. We had 2 tractors with trailers. The ride tours the farm, and takes about 40 minutes - depending on how talkative the driver is, and how much of a speed-demon he is behind the wheel, and what route they take. (The riders get to vote!). It's a very popular part of our festival. Eldon and George Murray did most of the tour driving and narrations. On this stop Eldon's cattle were in the field, and were curious about the tractors and trailers, with people sitting on hay bales - THEIR FOOD! Looks like the cattle were viewing the people as much as the people were viewing the cattle. 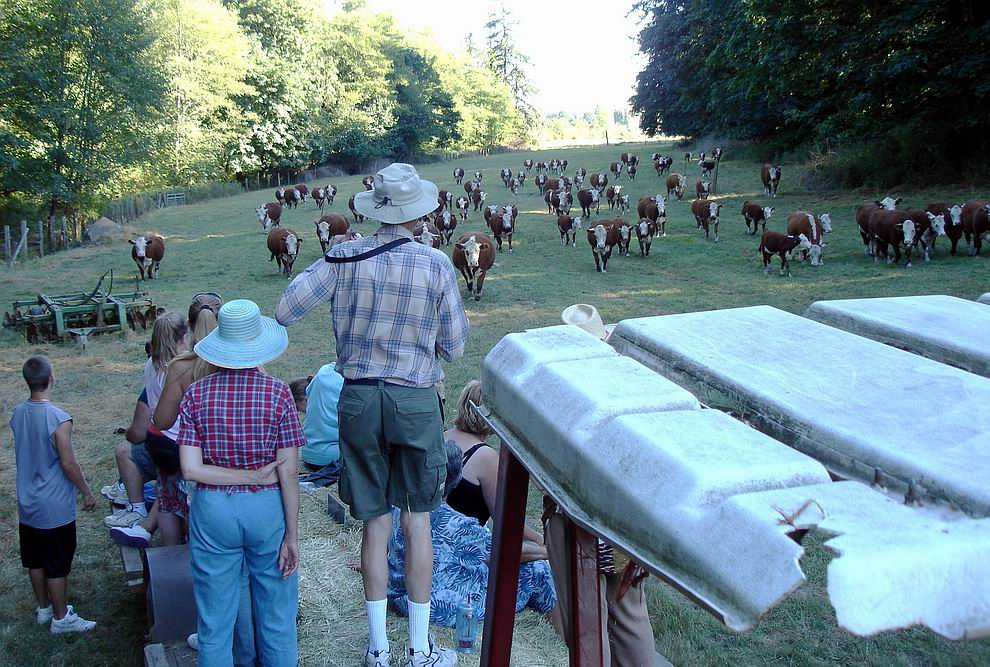 The herd of cattle went on up the hill. This photo was taken through the "escape hatch door" in the roof of the 2nd tractor, driven by Ben Murray. 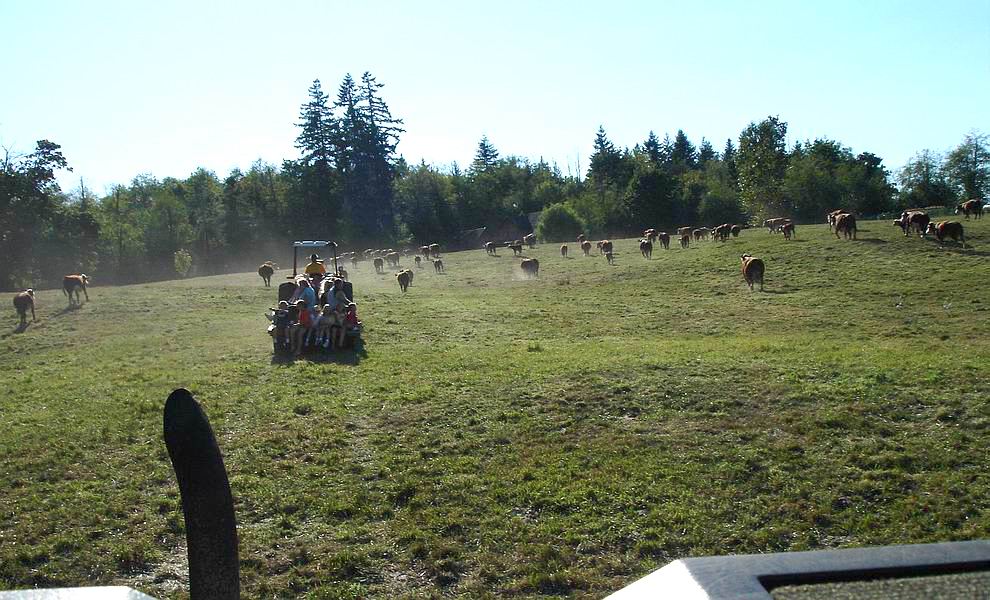 The cattle are sometimes fed bales of hay off of the trailer. They may have been expecting a meal, and followed the trailer for awhile. 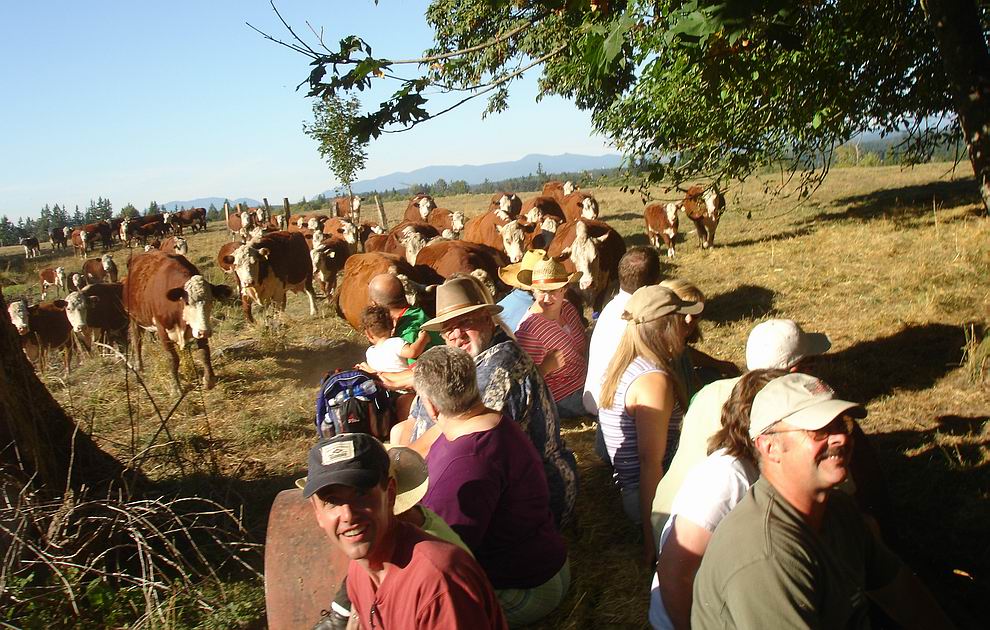 The Food Court. We had several tables of goodies, and a grill going cooking various kinds of hot-dogs. We also had 3 10-gallon containers with ice-water, ice-tea, lemonade, as well as a 45-cup coffee pot. Several of these had to be refilled. Many guests bring food to augment our own, making for a nice variety for others to choose from. Decorative flower arrangements added a "touch of country class" to the tables. Darwin Newell (one of Brian's friends) did most of the grilling. In the first photo, you can see the sign-in area, where we also had the guessing game. (There were 279 items in the big jar) 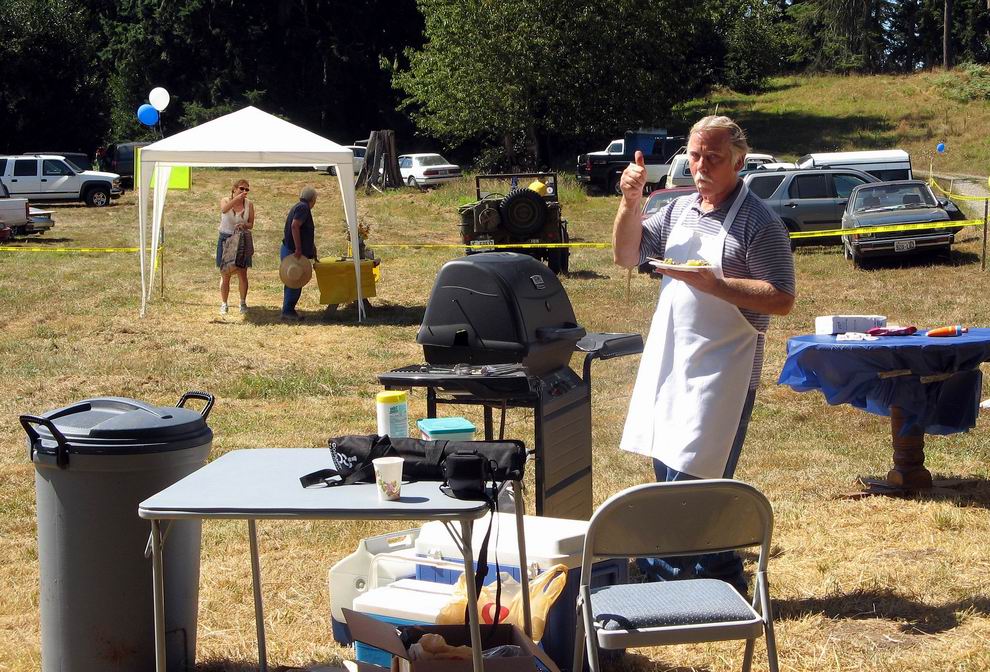 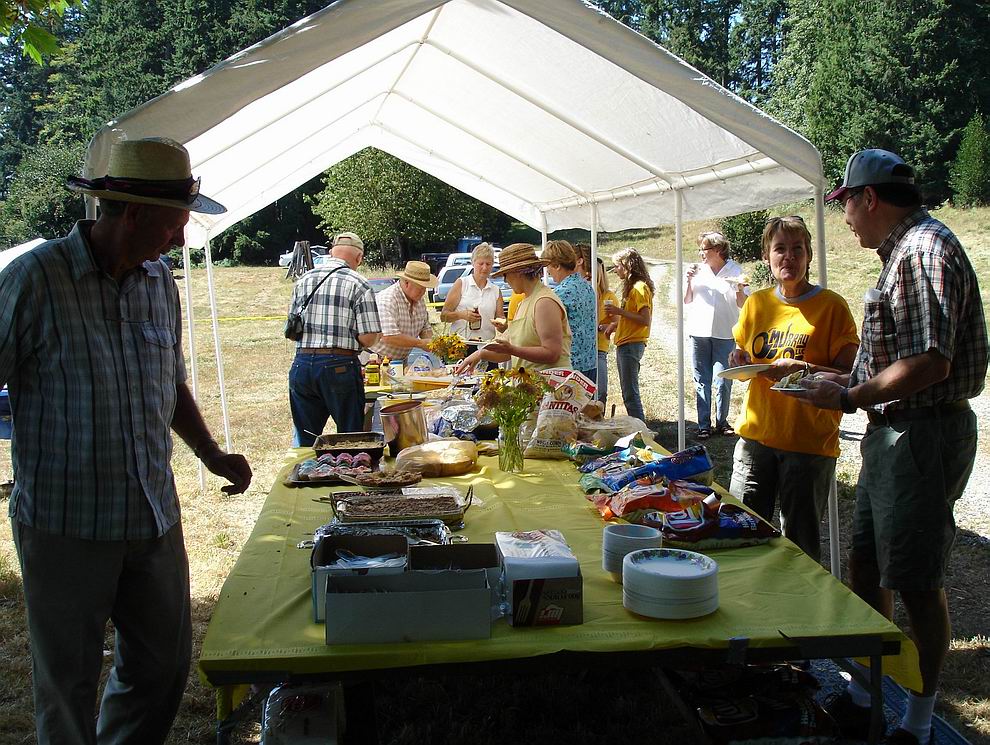 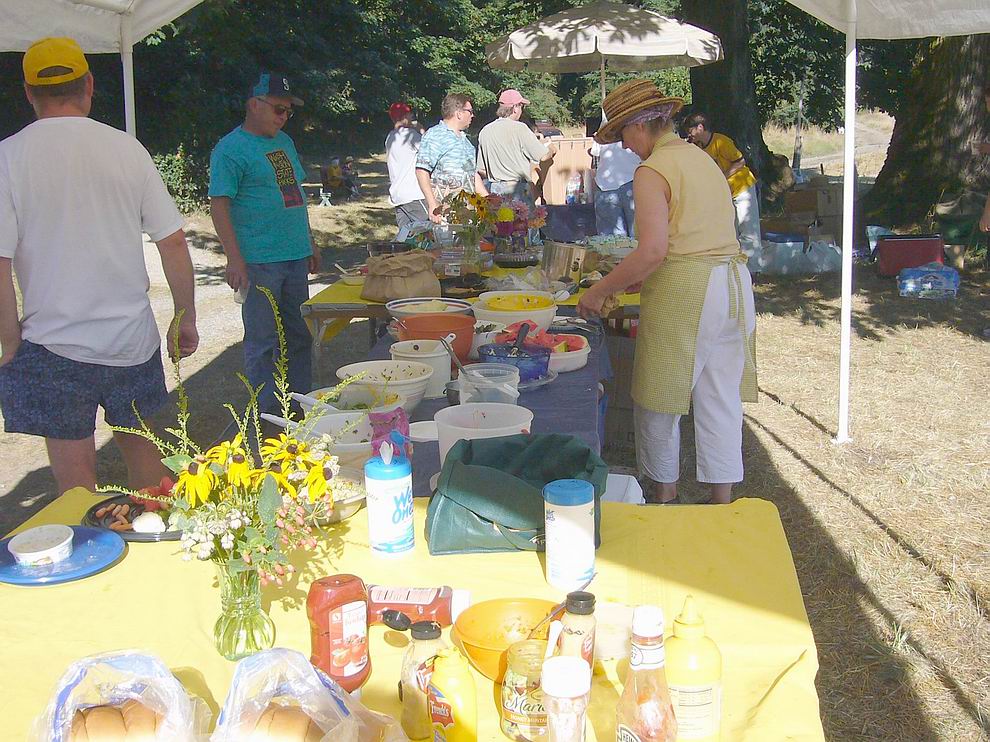 The Amphitheater-like seating area is in the shade of big maple trees. Another maple tree gave shade to the performers on the stage. At any time, there are many people gone on the hay ride. On the far right of this photo, you can see the Sousa band's Edith Farrar leading the "drill team" (the audience). You can see a few of them with their arms out front. It took them awhile to catch on, but they had fun. 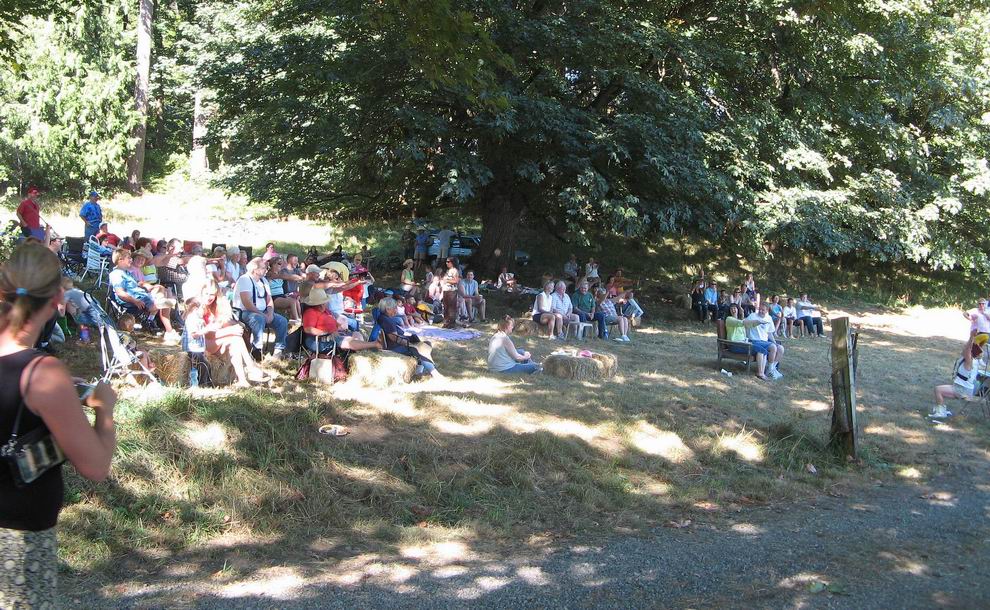 We provided hay bales to sit on, and some people brought thier own fold-up chairs or blankets. A few neighbors arrived on horseback. 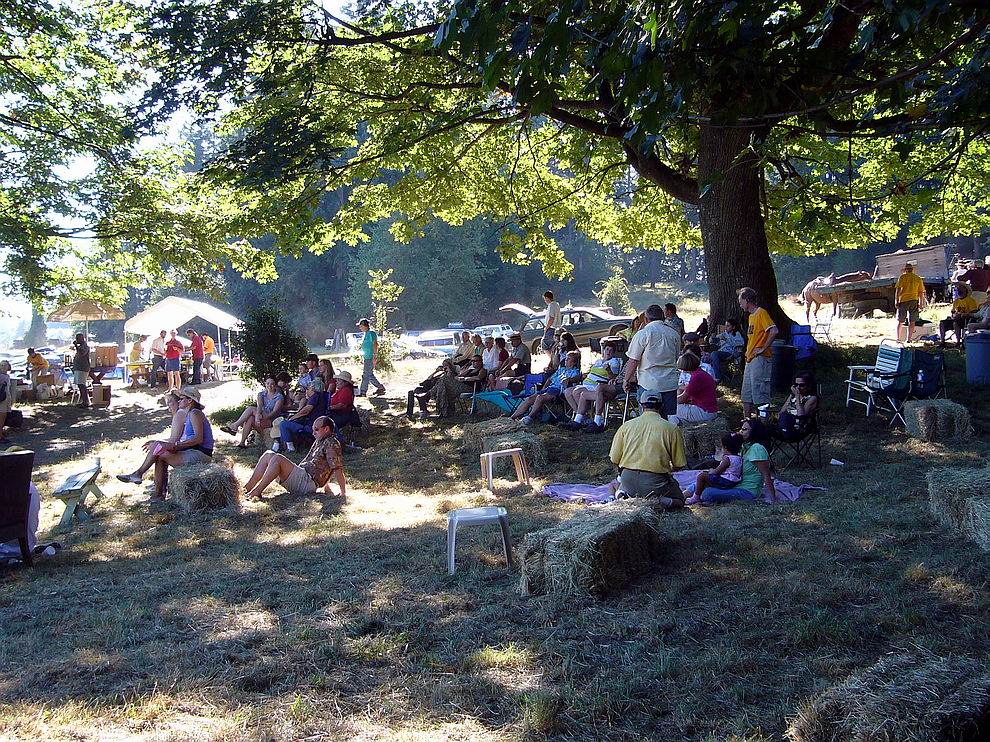 Mom (Phyllis Murray) gave a short talk on the history of the Murray family and the farm. Hilary's group is setting up on the stage. 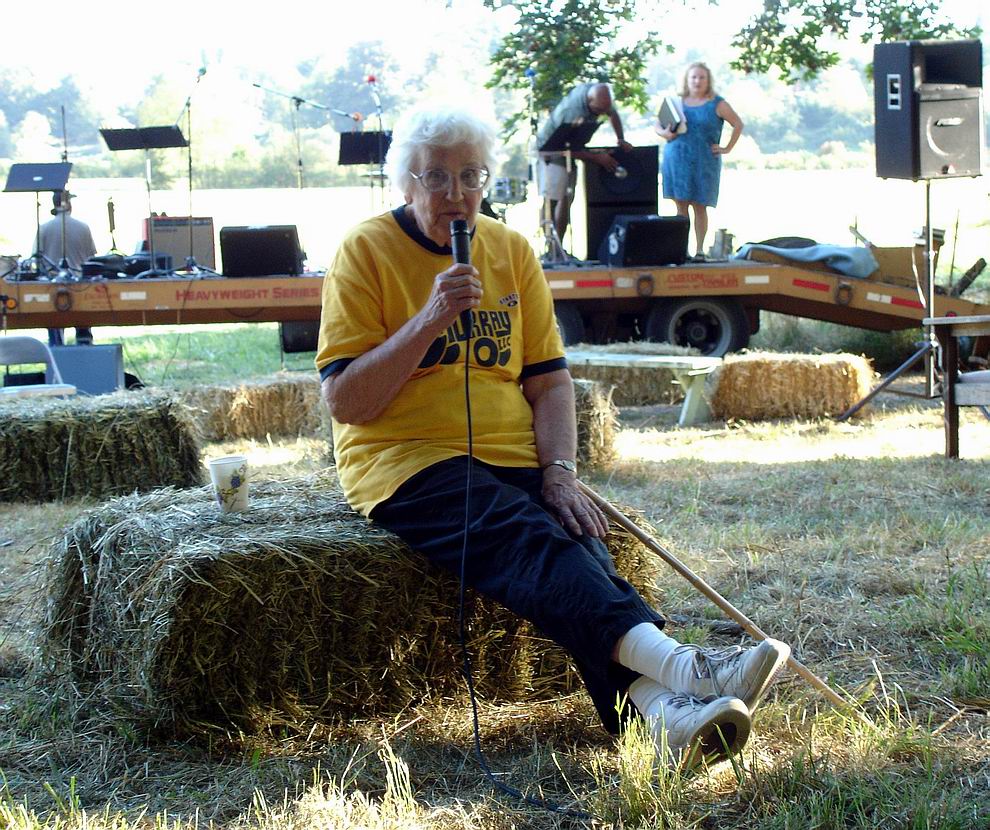 Mom and her special friend Ted Adsit. They're both 86. Ted is a good friend of the family, and has often come out to help around the farm, which we all really appreciate. Jer Murray is in the background running the sound. 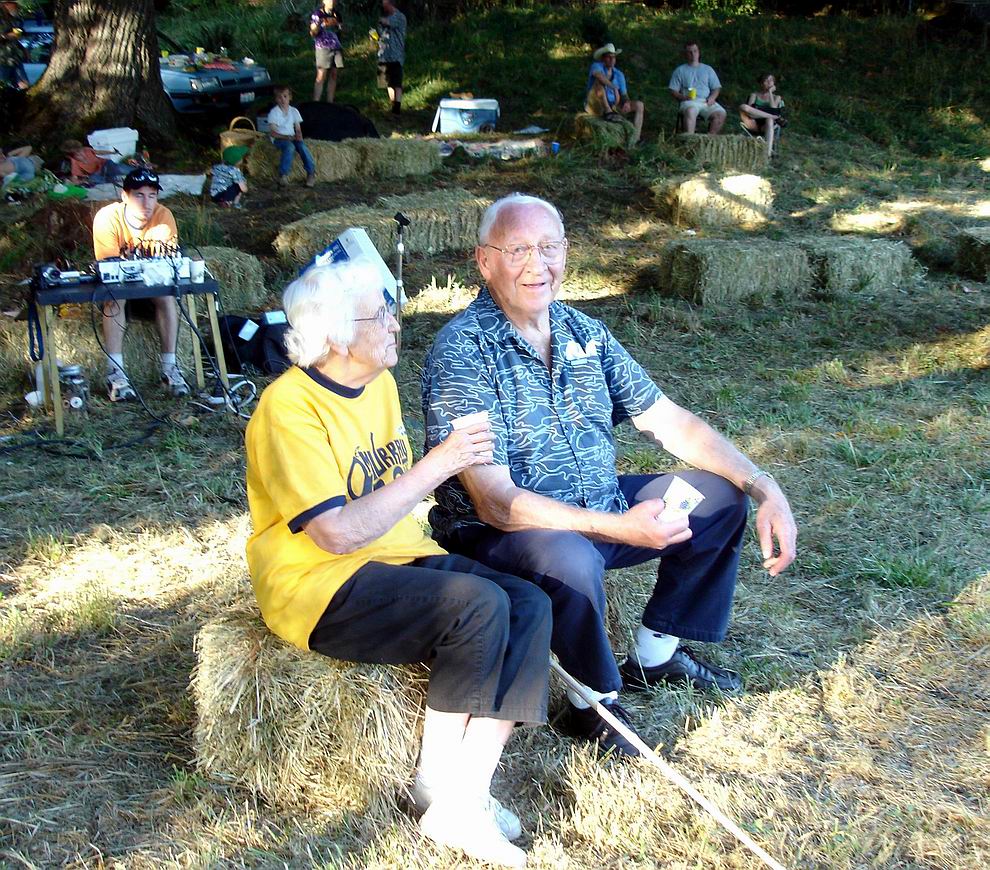 My nephew Ben Murray, and neices Alison, Megan and Kathryn Murray were all THRILLED to be wearing the spiffy family T-shirts. All of the Murray clan were wearing the MURRAY LLC T-shirts, with our farm logo on it. We have a few different colors, but all the shirts have the same logo, which was created by graphic artist Cliff Piraphatanapong. That's also the logo at the bottom of this page. 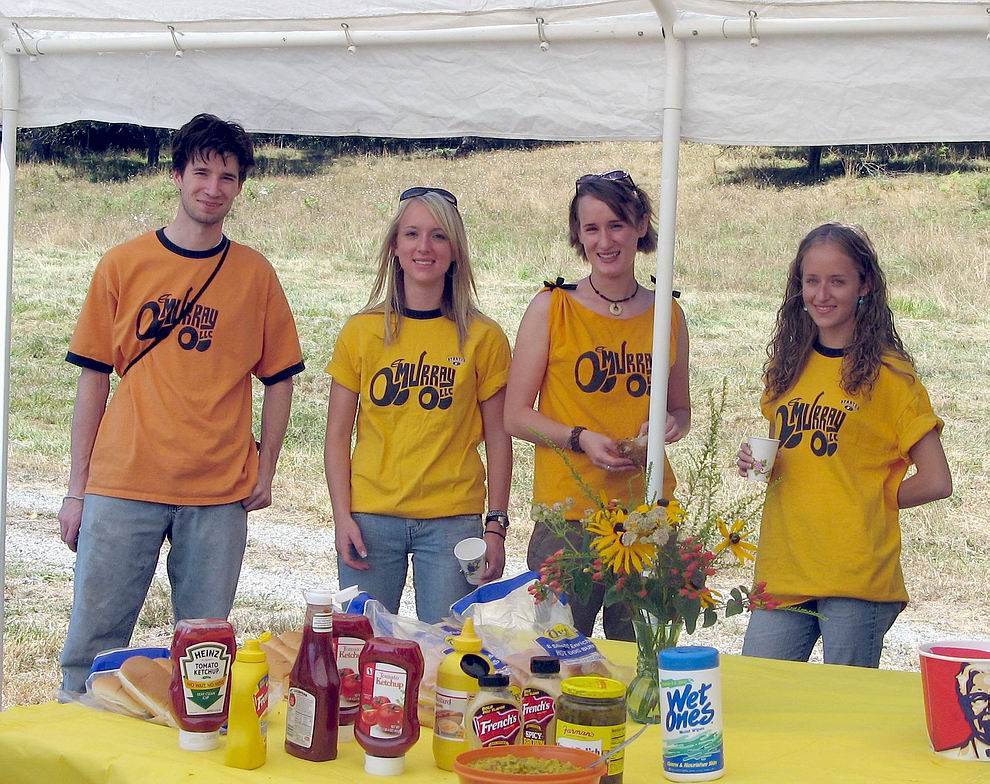 I had more pictures to sort through of Mt. Rainier than anything else from the festival. This was taken towards the end of the day. The "cloud" going around the mountain is actually smoke from the "Carbon Copy" forest fire. Some players are making use of the badminton court. The fields you can see between them and the mountain are a few of our hay fields. 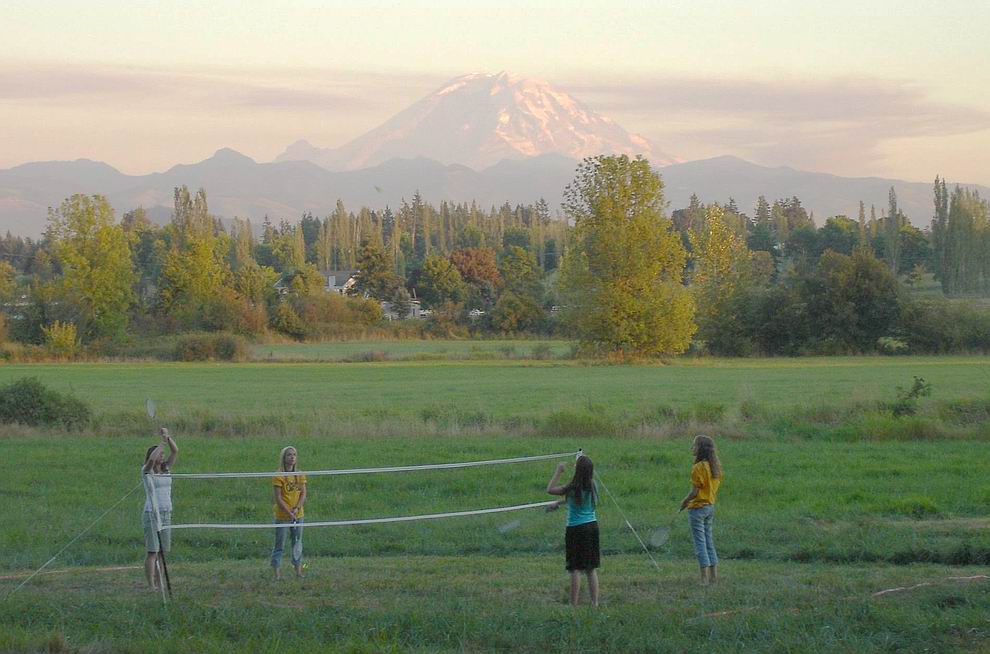 Thanks, and we hope to see you at the next Murray LLC Harvest Festival, which is tentatively set for Sunday, 26-Aug-2007.

Clayton Murray - (I was the guy in a yellow Murray t-shirt, running around organizing the bands, doing the MC-ing, running the sound and playing piano, tuba or accordion).